On a tiny street called via Jommelli, not far from the city center of Milan, two symbolic buildings face each other. Looking north, on the right is the Armenian Apostolic Church of the Forty Martyrs. On the left is the Serapian atelier, a brand founded by Armenian craftsman Stefano Serapian, the pioneer who lived on this street long before the church was built. The symbolism of the church is apparent, but what about the Serapian brand? Why do the bon viveurs of the elite call it il Segreto Milanese (the Milanese secret)?

Perhaps beginning a story with “Once Upon a Time” would make it seem a fable but it is appropriate for Stefano Serapian’s epic tale. From the family’s third generation records, the adventures of the 11-year-old boy began when, in the early 1920s, he and his little brother, Aramays, immigrated to Italy to escape the massacres in their Armenian homeland. This event not only influenced their lives but also changed their names. Aramays’ surname was recorded as Sirabian, by mistake, while Stepan was called Stefano, a name more familiar to Italians.

They parted soon after it was decided that Aramays had to study while Stefano would be the breadwinner of the family. When the younger brother went to Venice to receive his education, Stefano remained in Milan to search for work. He did manual jobs – shop assistant, handyman and delivery man for a pastry – until he ended up working with two sisters who stitched leather shoes. In the late 1930s, armed with the knowledge he had acquired and a suitcase full of his own personal leather-made goods, he set off on a journey around Lombardy seeking customers. They say that nothing happens by accident; during one of these trips, he not only found buyers, he also found his love, Gina Flori. She was one of his first loyal clients and would sell his creations in her shop in Montecatini, Tuscany. He would go on to name one of his bags, Gina, after the birth of their daughter.

Stefano and Gina settled in Milan and began producing leather bags in 1945. He was the creative mind and she was his business partner and they supported each other throughout the years. Gradually, they were able to draw the attention of not only the discreet bourgeoisie but also 1960s style icons to their designs. Soon, the “Made in Italy” brand was all the rage in the fashion world. In the 1966 movie How to Steal a Million, Audrey Hepburn, in a scene where she and Peter O’Toole are walking into the Musée Carnavalet, she is holding a small white Serapian trapezium leather bag with a short handle. Another time, as Frank Sinatra steps down from a plane after one of his trips, he is seen holding a Serapian business case. Even with such exposure among cultural icons, the brand still remained a niche that depended on word-of-mouth to share the location of the Maison. But what is the secret of the luxury house that became the benchmark of sophistication and elegance?

The combination of materials, textures and colors always makes use of a single technique for which the brand is well-known – Mosaico. Not only a leather goods producer but also an innovator, Stefano Serapian introduced the technique that consists of intertwined stripes of Napa leather forming a mosaic pattern.

It is difficult to define Milanese style, and even harder to follow it. For over 90 years, the Milanese brand has been synonymous with exclusive design of the highest quality. It has been associated with individuals who value novelty shrouded in secrecy and craftsmanship. The art of Milanese style neither emphasizes logos nor runs after labels but is always recognized by the connoisseur of high taste.

According to Giovanni Nodari Serapian, the Bespoke Manager at Serapian and also a member of the Serapian family, what makes the brand stand out from other luxury maisons, other than being entirely made in Italy, is its bespoke touch and made-to-order service. The brand takes into consideration the customer’s needs by adding small changes to designs and the production of accessories. “We need to understand that Serapian is not a fashion but a luxury brand,” says Giovanni. Any attempt to radically adapt to the latest trends or make compromises to the fast-growing competitive market would dissolve the decades spent preserving the brand as a luxury niche.

Stefano Serapian was passionate about his work and left more than 10,000 original designs and 700 original bags dating back to the 1950s and 1960s. While the design team constantly goes back to the archives of the founder to maintain the traditional heritage of the brand, they still manage to bring a fresh touch. For instance, in this year’s collection, they introduced three new bags: Villa, Diamante (Diamond) and Chiaroscuro, referencing the architecture of Milanese villas, mixing snake leather with bright colors, and creating an effect of light and shadow contrasts through an exclusive leather coloring technique.

Ardavast Serapian, the son of Stefano Serapian, was 21 when his father passed away in 1972. He took over the reins and managed the brand until 2017, when it was decided to sell to the Richemont Group. Just like Stefano Serapian and Gina Flori, Ardavast’s wife, Ani Serapian, was involved in all matters of the brand. They managed to expand Serapian’s sales into 20 countries, having stores throughout Europe, Asia, and the U.S. They opened a store on one of the most exclusive shopping streets in Milan’s via Della Spiga and another in Rome. Japan is another key market for the Maison, that is keen to high-quality bespoke creations.

The beginning of the 2000s marked a turning point for the brand when the clientele they had secured from the 1970s began to diminish, and the September 11 crisis adversely affected sales both in Italy and internationally. The alternative of terminating the brand wasn’t a consideration. At that time, while working for a private bank in Lugano, Switzerland, Giovanni Nodari joined his uncle Ardavast Serapian with big plans to relaunch the brand and expand internationally.

Ardavast recalls his father with fondness. “If you put a salt shaker in front of my father, he would chat with the salt until eventually, they would become good friends,” he said. It is one of the amusing details that the family remembers with smiles, along with his hospitality. When Stefano bought a house near the seaside in Tuscany, he enjoyed inviting family and friends to his place until one day, weary of the constant flow of people, he sold the house overnight. “He was very generous but he also knew when to stop,” his grandson and namesake Stefano said.

Language and customs usually come from mothers and for Ardavast Serapian, this was no exception. Because his mother Gina was Italian, Ardavast didn’t learn Armenian well. But his wife Ani and their son Stefano preserved the language. Selling the company didn’t come easy for Ani Serapian, who is still getting used to the absence of a frantic work schedule. Sometimes they visit the boutique on via Jommelli – it’s unavoidable, as their house is right next to the store – to help long-time, loyal clients.

“He was deeply in love with my grandmother, and deeply in love with his work,” says the younger Stefano. “She lived on the floor above me. Even though I was never directly involved in the company, it was impossible not to absorb the air that was coming from it,” he said.

The Armenian community, when gathered at Hay Dun (Armenian House) in the center of Milan, next to Duomo, usually refer to Stefano as a “son of Ardavast Serapian,” the third generation of the Serapian family. Currently, he works as a chemistry researcher at the University of Pavia. Unlike his grandmother, who wanted her grandson to carry on the legacy of their family, his parents supported him in choosing his own career path. Stefano regrets knowing about his grandfather only through family stories and having been given his name is quite ironic, considering they are not similar in nature. “He knew how to enjoy life. He was a great sportsman. He liked a lot of physical activities,” recounted Stefano. “He was an Italian weightlifting champion. I am not making this up. There should be some pictures. Yes, he is very stocky. He has the right build, probably the Armenian build. And he liked to swim.”

After the brand’s acquisition by Richemont, the headquarters were moved from via Jommelli to villa Mozart, a secluded neighborhood in the heart of Milan where other well-known families, including Nedda and Gigina Necchi, Angelo Campiglio and Romeo Invernizzi, used to live. The villa is currently owned by Richemont. During Milan Fashion Week, on February 21, 2020, villa Mozart welcomed its customers and the press to view the women’s 2021 collection. Entrance was by invitation only. The first floor of the villa showcased the latest novelties of the season. They were presented by Merchandising Manager Anna Potena, who described them in detail while giving a small tour. Crocodile, alligator, python, lizard, the list of exotic leather goes on in the brand’s bespoke repertoire but the traditional products are still based on pig and calf-skin. The Pelletteria Richemont Firenze (Richemont Leather Goods in Florence), together with the Serapian factory in Varese, search for new leather treatment and construction techniques. The bestseller of the maison still remains the Secret bag which reflects the culture of exclusivity and the DNA of Serapian: one customer asked to add a secret pocket for her personalized Serapian bag and it became history. It is worth noting that Stefano Serapian gave bags Armenian names, while now they are in Italian and stand only for the inspiration behind the design.

When you go downstairs at the villa Mozart, you see Anetta, sitting in front of a table full of leather shreds meticulously forming the Mosaico pattern. Distracting herself for a second from work, she asks with a smile: Do you want to try? Here, in the atelier, the team engages in three main activities consisting of production, research and development, and bespoke services. Besides the names and initials of the clients, or the double-S logo of Serapian, one of the clients even sent a portrait of his dog to be stamped on the leather. Certain services, such as IT and human resources, are provided by Richemont to allow the creative team at Serapian to focus on the DNA of the Maison.

After so many years of precious contribution to the Milanese luxury niche, the Armenian part of the brand remains firm. Giovanni Nodari, the thread linking the Serapian family and Richemont group,shared the brand’s plans to visit Armenia and find partners for future collaborations.

All the discussions about purchasing and selling the brand didn’t affect its link to the designer’s origin – Armenia. “He was extremely proud to be Armenian,” emphasized his grandson, Stefano. He had close connections with the Armenian community. Armenian language and culture were the strong fibers that made up his identity and inspired his work. Thanks to his efforts, in 1958, the remains of a previously-bombed house across the street were transformed into the community’s Armenian Apostolic Church. Today, around 3,000 Armenians are spread around Italy, with the largest communities in Rome, Venice and Milan.

And it is in Milan, where Stefano Serapian’s story and legacy is remembered and treasured to this day.

The factory of Jommelli. 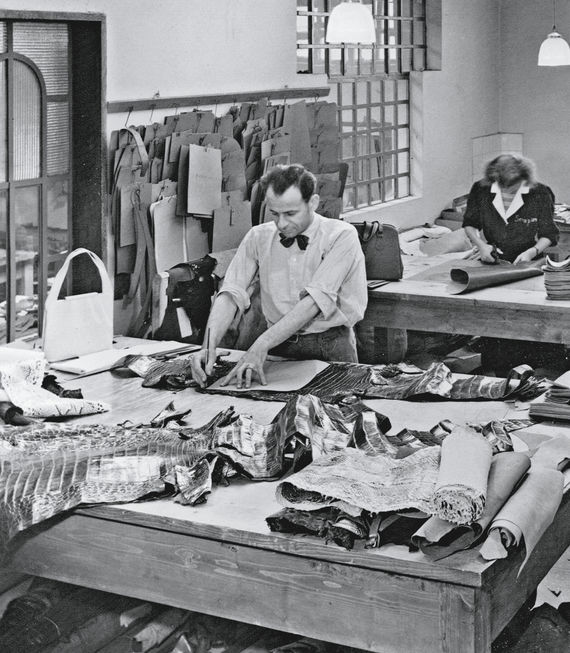 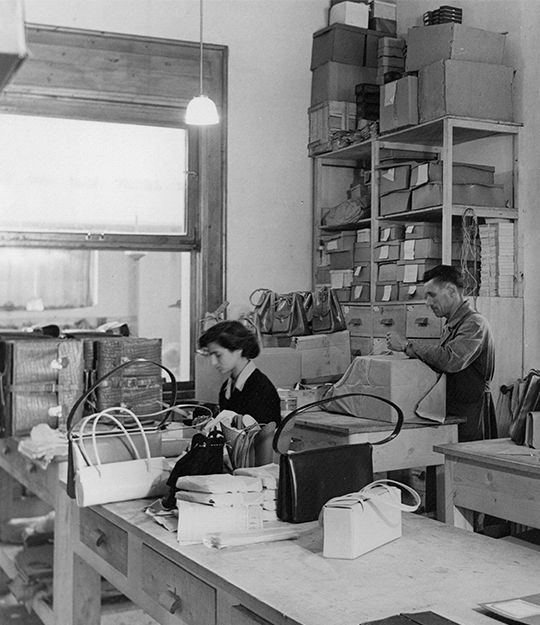 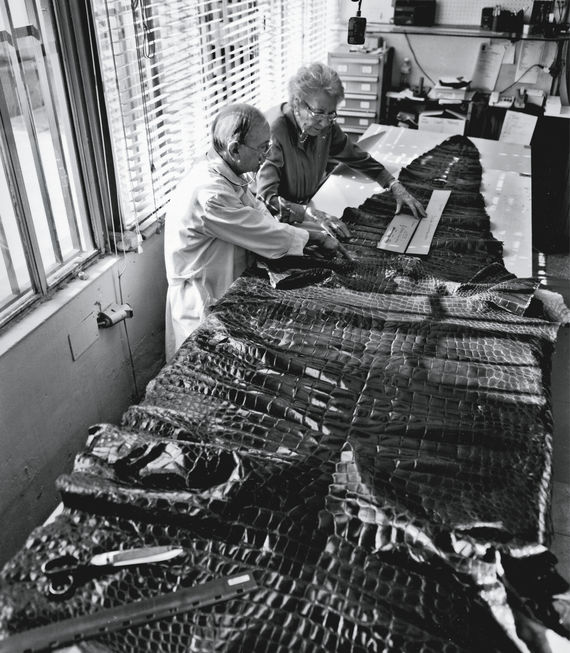