EVN WALKS: A Gyumretsi in Yerevan 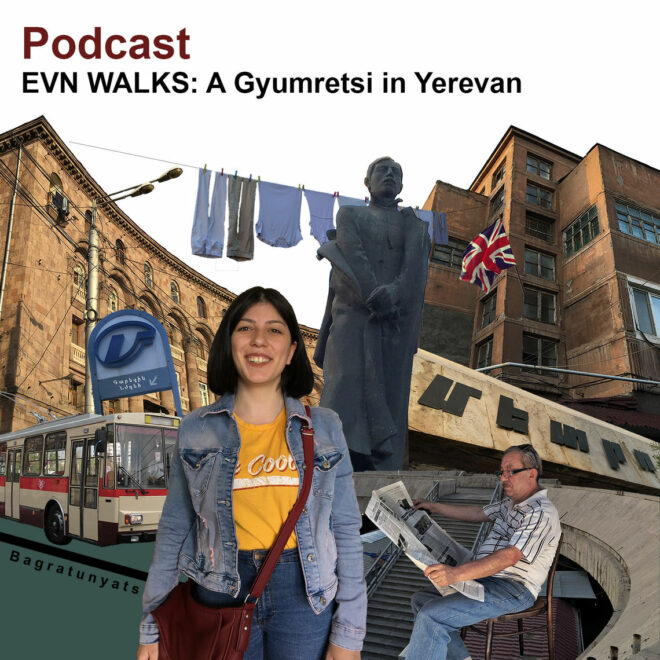 A special podcast series featuring ordinary people walking through the streets of Armenia’s capital city Yerevan. This week’s host is Susanna Ghazoyan, a resident of Gyumri, currently a Masters student in Yerevan who considers herself to be a pretty funny person.

Karen Demirchyan Subway System – The subway was opened in 1981 and currently has a single line with 10 stations. It also has a short and separate line that serves the Shengavit-Charbakh branch. The construction of the subway was initiated by Karen Demirchyan, who was then the First Secretary of the Armenian Soviet Socialist Republic.

Garegin Nzhdeh Square – Formerly known as Suren Spandaryan Square, it is the second largest square in Yerevan, located in the Shengavit district. The statue of Suren Spandaryan is in the middle of the square.

Suren Spandaryan – An Armenian literary critic, journalist and a Bolsehvik. In 1912, he was arrested and then was sentenced to exile in Siberia where he died four years later.

Third Mas – One of the urban areas of Yerevan, a part of Shengavit district.

Rabiz culture – A musical genre in Armenia formed during the Soviet Union. Back then the culture was associated with workers and the word rabiz was an abbreviation of Russian “Rabochee Iskustvo” meaning “art of laborers.” Other theories state that the word has Turkish origins: “rab” meaning a creator, and “aziz” meaning darling. Rabiz music sounds like a mixture of Arabic and Turkish melodies and Armenian words.

Qyart subculture – A type of people in Armenia who are known for wearing black, listening to rabiz music, speaking in criminal terminology and being conservative.

Gyumri – The second largest city in Armenia, famous for its arts and crafts. The city was largely affected after the 1988 Spitak earthquake that took the lives of 25,000 people.

Trolley – An electric bus using an external source of electricity and one of the transportation means in Yerevan.